One hundred is a significant number. A little child feels accomplished when she learns to count to one hundred on her own. More impressively, when a person reaches the age of one hundred we all see it as an important milestone. PocketiNet Communications, based in Walla Walla, Washington has reached a momentous event of their own. Recently, they connected their one hundredth customer to their new Gigabit Fiber-to-the-Home network known as Gigabit Country.

Who was the lucky number one hundred? Jim Wright, owner of Tesla Winery Tours in Walla Walla, WA. Jim waited patiently for nearly five months for Fiber to reach his home. That pales in comparison to the eighteen months he waited to take delivery of his beautiful Tesla Model X 90D. 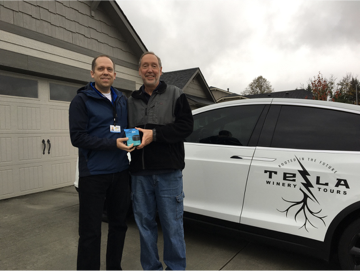 About five years ago, Jim, a Federal Marshal, began making solid plans to retire. Everything was in place except the location. Gig Harbor, WA was high on the list but Jim started seeing article after article in national publications about a great little town in eastern Washington named, Walla Walla. So, Jim and his wife visited to see if all the hype was true. It was. After several annual visits they retired and moved to Walla Walla hoping to add to the town’s friendliness.

As Jim was preparing to retire, he knew he wouldn’t want to sit around after retirement, so he developed a plan to launch Tesla Winery Tours. Even before moving to Walla Walla he ordered his Tesla and waited. It’s a decision he hasn’t regretted.

If you talk with Jim, it’s obvious he likes technology. That affinity for tech made both Tesla and PocketiNet logical products to meet his needs. After all, both Tesla and Gigabit Country Fiber are fast! Tesla vehicles come with software letting a driver choose their preferred performance output. Settings range from Standard to Ludicrous (that’s actually what Tesla calls it). PocketiNet’s Gigabit Country Fiber also comes with customer performance options. Internet packages range from 100Mbps up to the ludicrous 1Gbps. Not only is Gigabit Country fast, it’s incredibly reliable.

Jim enjoys meeting new people and loves talking about his Tesla. He is a believer. He’s a Tesla believer, a Walla Walla believer and a PocketiNet believer.

As their one hundredth Fiber customer, PocketiNet presented Jim with an Amazon Echo Dot. Because, in the end, a man who likes technology enough to wait a year and a half for a Tesla and another five months for the fastest Internet connection in town, should be able to voice command his car out of the garage. Want to see how Amazon Echo and Tesla integrate, when you have the best Internet available? Check out this video on YouTube.

PocketiNet Communications is a locally owned and operated broadband Internet and Home Automation and Security service provider. Founded in April of 2000, PocketiNet serves the Mid-Columbia Basin from Walla Walla to Yakima, WA, south to Umatilla, OR, and all points in between. In the competitive market of broadband Internet service providers, PocketiNet has positioned itself above the competition by actually delivering on its promises: speed, reliability, value, dedication and customer care.

Even though it seems like ancient digital history, about a year ago the “Be Like Bill” meme went viral. If you’re unfamiliar, the meme consisted of a black and white drawing of a stick figure sitting at a computer desk. The caption would extol readers of Bill’s virtues and then spur readers to action with a final phrase, “Be like Bill.” As with most viral meme’s it had fifteen minutes of fame and quietly disappeared. Today, I’d like to revitalize the meme but this time title it, “Be like Zach.”

Pictured below, you see Zach and Wrandoll. Zach lives in a relatively new neighborhood in College Place, WA. One day, not long ago, Zach heard via word of mouth about PocketiNet’s Gigabit Country Fiber-to-the-home initiative. Wanting to know more, he reached out to PocketiNet asking if there was anything he could do to promote Gigabit Country in his neighborhood? The answer from PocketiNet, “Of course!” 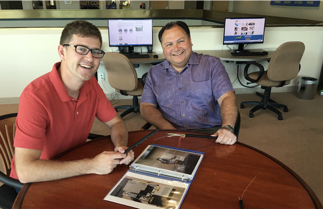 PocketiNet is currently deploying Gigabit Country Fiber in the Walla Walla Valley and the greater Tri-Cities area. PocketiNet has been providing commercial Fiber to these areas for over 10 years but residential Fiber has been too expensive to for most homes. All that changed about a year ago. With several large Internet Service Providers now deploying residential Fiber in urban areas across the nation PocketiNet, a local company, decided to start the process in Walla Walla. Todd Brandenberg, PocketiNet’s president and founder says, “PocketiNet is committed to south-eastern Washington. We want to be the ones to serve our neighbors instead of waiting for a corporate giant to eventually get here.” He continues, “We’re from this area, we love the quality of life people here enjoy, and we want to help make it better.” That commitment coupled with Fiber’s new affordability has fueled PocketiNet’s desire to provide state-of-the-art Fiber to local homes.

When Zach reached out to PocketiNet they invited him to their Gigabit Country Experience Center to meet with Wrandoll and several other staff members. The topic of conversation was how best to rally his neighborhood so it can be one of the next to get Fiber Internet. Zach left with brochures, door hangers, and various other promotional materials to share with his neighbors. Zach isn’t normally the type of guy who goes around knocking on doors to introduce himself. It was a bit out of his comfort zone. Once Zach began going door to door he said, “I was most comfortable hanging door hangers, but doing so sparked conversations with some of the homeowners in the neighborhood.”

For folks who aren’t sure they need Fiber, Zach reminds us that times are changing quickly and technology is advancing rapidly. He says, “We used to think phones were just for calling people!” Now we have smart phones which are basically mini-computers in our pockets.

Are Zach’s efforts paying off? You bet. His neighborhood is nearly 30% of the way to meeting the construction goal. Perhaps you’re reading this and thinking you’d love Fiber to your home but you’re not about to knock on your neighbors’ doors to extol them on the virtues of Fiber. You can still make a difference. Sign up at PocketiNet.CrowdFiber.com. As part of that process, you can anonymously send Gigabit Country postcards to your neighbors encouraging them to sign up as well. Lastly, if you’re interested, PocketiNet would be happy to put a Gigabit Country yard sign in your yard.

Zach worries he may be pushing Gigabit Country too much with his neighbors. They won’t think him pushy once they experience Fiber. After all, it increases home values by 3-5%, on average. It’s virtually future proof. As our homes, cars, and personal devices vie for bandwidth, Fiber consistently delivers. Imagine streaming 4K UHD movies to your TV with nearly zero waiting, zero pixilation, zero buffering, and it’s never impacted by the weather. PocketiNet’s Gigabit Country services offer up to 1000Mbps Internet speeds with managed Wi-Fi, digital home automation, security, home phone, video surveillance, video streaming systems, and DIRECTV for folks who want a traditional TV experience.

Want to try it out for yourself? Visit PocketiNet’s Gigabit Country Experience Center upstairs at the Walla Walla Regional Airport or in their Tri-Cities office at 6503 W. Okanogan Avenue, Suite G (after Nov 1st). Zach did. His response: “It was really neat to see it all working.”

When Zach was asked why he wanted Fiber to his home he said, “I want to be prepared for the future of the Internet.” I say to Zach, “Good for you Zach.” I say to you, “Be like Zach.”

PocketiNet Communications is a locally owned and operated broadband Internet and Home Security service provider. Founded in April of 2000, PocketiNet serves the Mid-Columbia Basin from Walla Walla to Yakima, WA, south to Umatilla, OR, and all points in between. In the competitive market of broadband Internet service providers, PocketiNet has positioned itself above the competition by actually delivering on its promises: speed, reliability, value, dedication and customer care.